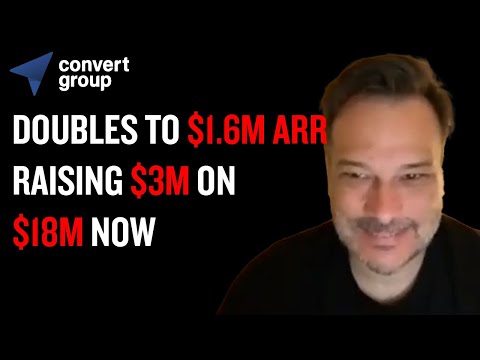 Convert Group has raised a total of $1.2M.
Why are so many SaaS founders taking money from Founderpath.com instead of VC's?

Convert Group has an annual churn rate of 3.00%

Convert Group has 55 employees. They have 4 sales reps that carry a quota and an engineering team of 20.

Panayotis has been managing projects and firms across various industries with a focus on eBusiness & Technology.Before founding Convert Group, he led many firms το successfully kick-off their eBusiness projects, as a self-employed eBusiness consultant. He also headed ELTRUN’s e-consulting business unit for 3 years. He co-founded and was the CEO of buldoza.gr, one of Greece’s top etailers in fashion, personal care & homeware. He has also served as Upstream’s Head of Business Planning, leading the firm’s expansion in 40 countries and directing sales offices in Rome, Beijing, Singapore, Athens, Bucharest, Toronto, City of Mexico and Rio de Janeiro. Other senior positions held include VoiceWeb’s, a leading company in Speech Recognition & mobile marketing, Chief Commercial Officer for 4 years, and acting-CEO in Printing & Publishing firms.He is the co-author of strategy books and he hopes that someday he will revive his Be eBusiness blog. He is married to Elena, a style editor and fashion blogger, and together they have a 15month-old son that drives them crazy! He also used to be the Director General of GRECA, the Greek eCommerce Association, during 2014-2015.|Pan has been managing projects and firms across various industries with a focus on eBusiness & Technology. Amongst his roles was Head of Business Planning, for the leading mobile commerce firm, Upstream, with business development responsibilities in 40 countries. He founded Convert Group on 2014 as an eCommerce Consultancy and in 2019 they pivoted into an Enterprise SaaS with his partner, Elena.

When was Convert Group founded?

Convert Group was founded in 2014.

Who is the CEO of Convert Group?

How many employees does Convert Group have?

How much revenue does Convert Group generate?

How much funding does Convert Group have?

Where is Convert Group headquarters?

Convert Group is headquartered at Greece

HubSpot Inc. is a provider of cloud-based marketing and sales software solutions to mid-market businesses that are delivered through its centralized platform, which allows businesses to create personalized interactions with customers through emails and social media alerts. Its solutions include social media, search engine optimization, blogging, website content management, marketing automation, and data analytics capabilities. The company derives revenue from subscription fees to its solutions that are typically sold on an annual basis. A majority of the firm's revenue is generated in the Americas, but it also has a presence in the Europe and Asia-Pacific regions.

Cloudera Inc is a United States-based software company. It has developed platforms for data management, machine learning and advanced analytics. The company's platform enables organizations to use vast amounts of data from a variety of sources, including the Internet of Things (IoT), to better serve and market to their customers, design connected products and services and reduce risk through greater insight from data. The company's platform addresses three new transformative markets, Dynamic Data Management Systems, Cognitive/AI Systems and Content Analytics Software and Advanced and Predictive Analytics Software.

Create a free account to view data on 30,318 SaaS Companies

GetLatka is the only place to get accurate revenue data on SaaS companies. You'll also see valuations, growth rates, CEO emails and 28 other metrics per company. Signup below to view instantly.

Then take audio data and organize it in charts and excel.