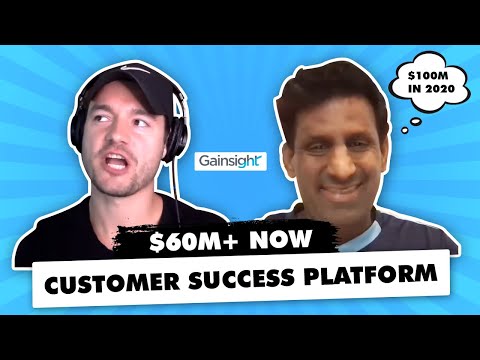 Gainsight has raised a total of $190.7M.
Why are so many SaaS founders taking money from Founderpath.com instead of VC's?

Gainsight has an annual churn rate of 10.00%

Gainsight has 720 employees. They have 61 sales reps that carry a quota, an engineering team of 298 and a marketing team of 19.

Nick Mehta is CEO of Gainsight, the Customer Success Company. He’s a big believer in the Golden Rule and tries to apply it as much as he can to bring more compassion to his interactions with others. Under Nick's leadership, Gainsight was named the second fastest growing private software company in 2015 by Inc. Magazine. On top of that, Forbes ranked Gainsight as the Best Enterprise Software Company to Work For based on Glassdoor ratings. As Nick likes to say (a little too fast and a little too often), that's awesome. Previously, Nick worked as an Entrepreneur in Residence with Accel Partners developing opportunities in the enterprise applications and infrastructure markets. He was also CEO of LiveOffice, where he led the company’s profitable growth to $25 million in revenue and through its successful sale to Symantec in 2012 for $115 million. LiveOffice was recognized as a Visionary by Gartner, as an Inc. 5000 company, and as an Ernst & Young Entrepreneur of the Year finalist. Before joining LiveOffice, Nick was a Vice President at VERITAS Software (acquired by Symantec). Don't get him started on theoretical physics or Steelers football—he'll talk your ear off!

5 disfunctions of a team

Apply to work at Amazon

When was Gainsight founded?

Gainsight was founded in 2012.

Who is the CEO of Gainsight?

The CEO of Gainsight is Nick Mehta

How many employees does Gainsight have?

How much revenue does Gainsight generate?

How much funding does Gainsight have?

Where is Gainsight headquarters?

Help Desk Software with support ticketing system that helps you be more productive and build customer loyalty. Start your free trial today by joining over 131,000 other customer support heroes!

Intercom is a Conversational Relationship Platform (CRP) that helps businesses build better customer relationships through personalized, messenger-based experiences. It‚Äôs the only platform that delivers conversational experiences across the customer journey, with solutions for Conversational Marketing, Conversational Customer Engagement and Conversational Support. Intercom is bringing a messenger-first experience to all business-to-customer communication, powering 500 million conversations per month and connecting 4 billion unique end users worldwide across its more than 30,000 paying customers, including Atlassian, Sotheby‚Äôs and New Relic.The company was founded in 2011 in San Francisco by Eoghan McCabe, Des Traynor, Ciaran Lee and David Barrett, with the mission to make internet business personal. Intercom was valued at $1.275 billion in 2018 and has secured $241 million in funding from investors including Kleiner Perkins, Bessemer Venture Partners and Social Capital.